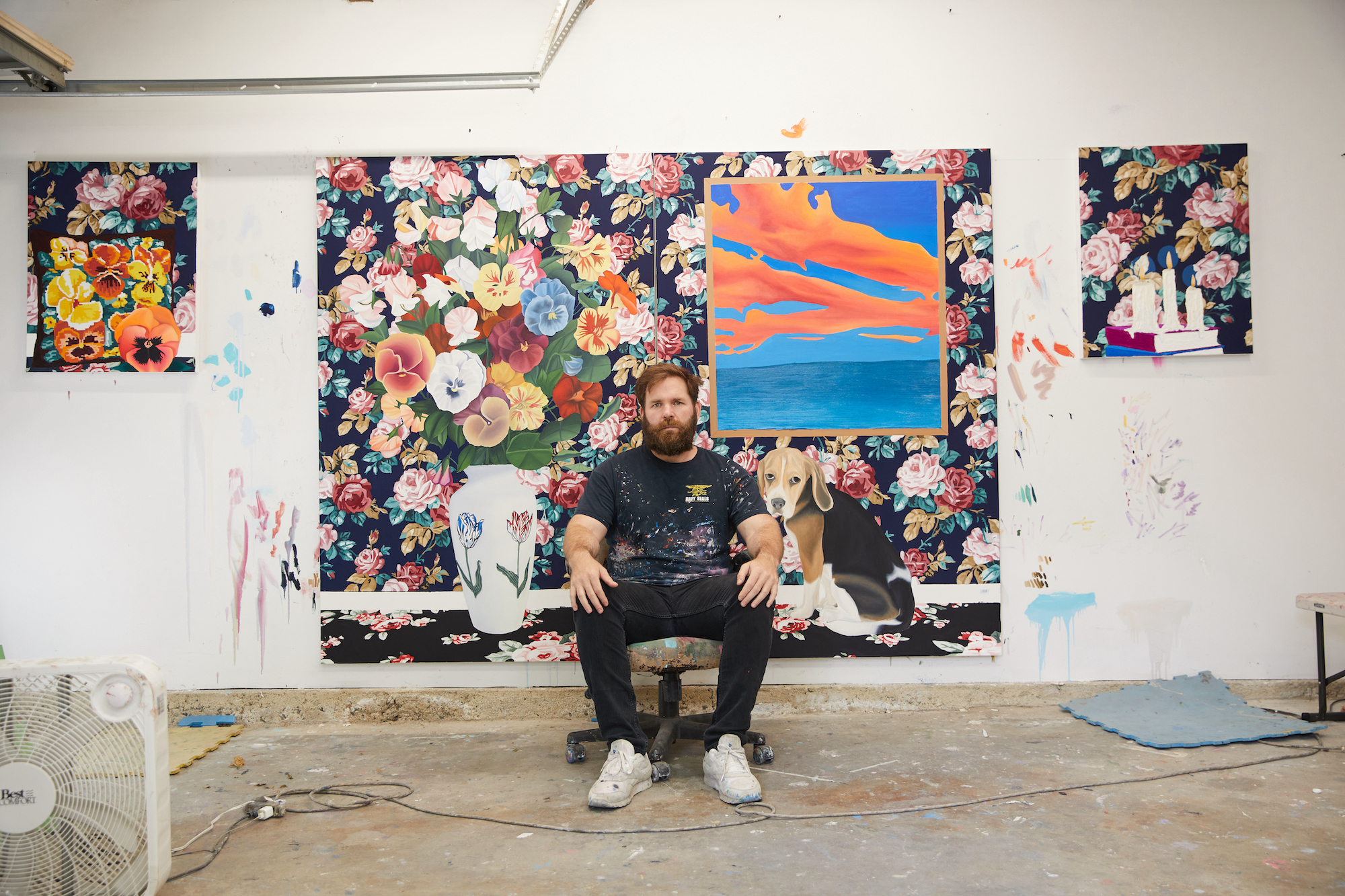 We all live inside Alec Egan’s bizarre floral paintings – SURFACE

Using floral motifs and everyday objects, the Los Angeles painter conjures up crisp still lifes of perfectly domestic settings where psychodrama creeps in and all is not as it seems. Ahead of his latest solo exhibition, “The Study: A Solo Presentation of New Work by Alec Egan” at the Charles Moffett Gallery in New York, he discusses the commonalities between poetry and painting, the influence of Laura Ashley and why he don’t have flowers in his own house.

Your recent shows have all built a room in an imaginary house. Even though the owner is gone, do you know who lives here?

Sometimes I have an idea of ​​the kind of person who lives here, and sometimes not. The narrative of these competing series of paintings aspires to construct an entry point for the construction of identity, but never directly aims to expose a concrete identity. So sometimes my guess is as good as yours. I think anyone who looks at the work in depth begins to construct their own perception of a character’s identity. That’s what interests me the most.

It’s hard not to correlate this piece, “The Study,” with recent concerns about remote working and returning to the office.

Working remotely wasn’t of major exploratory importance to me, selfishly, because as a painter I always work remotely, so I don’t really think about it much. The subject of interiors and domesticity presents a whole new set of psychological complexities due to the pandemic and of course I find it to be a rich area to explore and think about – especially a place in a home where we go to assimilate information or learn. The study functions as a space where, on the one hand, one can be obsessed with a problem that one cannot solve (trying to solve the insoluble) but, on the other hand, one can withdraw to escape into a fantasy or hobby. I thought duality was appealing and timely to explore.

How do you know which objects to include in each room? What do you think they say about the owner?

Objects somehow include themselves. The inclusion of an object is rarely pointed and symbolic. Instead, they’re more about connecting visual patterns and trying to be additive while maintaining a sense of normalcy in the compositions. By constructing the rooms as organically as one might design their home – by accumulation – the objects and their placement seem completely familiar and yet very singular to the surroundings of the paintings. This tension helps the viewer feel constantly on the verge of placing the environment, but always just out of reach.

The floral designs resemble those of Laura Ashley, an iconic brand described as “typically English” but whose recent bankruptcy filing leaves it squarely in the past. But throughout these paintings there are feelings of dread for the future. Do you find that you think more about the future or the past when you create?

I can’t believe Laura Ashley is bankrupt! I did not know. They certainly helped introduce patterns into a certain traditional lexicon. I remember seeing them everywhere growing up. Despite Laura Ashley’s passing, the pattern’s use and popularity continues to grow and decline. What was heavily ornate in the 1940s/50s/60s in pattern and design can and has reemerged in the 21st century as campy chic and now mainstream popularity once again. The recycling of cultural iconography intrigues me because it helps reference both past and present (and perhaps the future) by creating spaces that are curiously both nostalgic and current.

Each work seems to attribute a deeper meaning to mundane objects, from the off-hook telephone to the single clementine. Have you always paid attention to the little things?

I have. I feel like I’ve always had a philosophical bent for the existential which, in a strange reversal of logic, has made me more connected to mundane objects. In other words, while I have always questioned the meaning of everything in general, I have found solace and connection in the hardcore household objects around me. I guess the artifact of a painting interests me so much because it exists somewhere between the existential and mundane household object. It fills a gap.

There are also cultural references, such as the Jaws attach.

I got interested in the Jaws displays because of the imagery, which evokes reptilian brain anxiety. I think this kind of evocative primal anxiety is one we can all relate to lately.

How does your background in poetry shape your artistic talent? If you could capture the essence of the show in one poem, what would it be?

Good poetry is about using the economy of language to expose the true nature of something, no matter how small. This is what I hope to do through the language of painting – to look at the small things and the economy of their composition in relation to each other and hopefully expose something nuanced about their identity or that of their owner. I don’t know if there’s a poem that can capture the show or one that speaks directly to its essence, but this stanza from Mary Oliver comes to mind:

where will we go
with our table and our chairs,
our bed,
our nine thousand pounds,
our television, PC, VCR,
our cat
who is sixteen?
Where will we drop off
our dishes and our blue carpets,
where are we going to put
our rose,
rice paper
shades?

Does repetitive rendering of floral illustrations ever get tedious?

Oh my, and all I can hope for is that the psychological feat it sometimes takes to make the paintings is somehow imbued in the paintings themselves.

You said it “amazes you” that humans have taken flowers so far from their original habitats – from the wild to gardens, potted houseplants and now printed on wallpaper. Why do you think we gravitate towards flowers as a design element?

Apart from fire, flowers are probably the oldest natural phenomenon to have symbolic cultural value. I don’t know why it happened, other than common sense. For this reason, they are and forever will be the predominant icon of human beauty and therefore lend themselves to endless design tropes.

Do floral patterns appear in your own space, or is it something you prefer to keep on canvas?

I keep it on canvas. I spend so much time creating the patterns that it’s like living with them. When I’m not with the bosses, I prefer to be in a more open and empty space.

What drives you to keep exploring the ideas behind still lifes? Has your appreciation of the genre evolved throughout the confinement?

My appreciation of still life is equal to what it was before confinement. Exploring still lifes interests me as much as being reluctant to explore the figure. Through the still life, one can demonstrate the prosaic device of “showing” instead of “telling”. It excites me as a storyteller.

You are also making your debut with sculptures for the first time.

I made my debut in sculpture as well as in the installation of wallpapers and floor coverings. All these decisions were made to accentuate the psychological effect of the patterns but also to bring the concept notes of the interior to life. I really hope it turns out as overwhelming as I imagine.

What room will you build next?

This is the question that everyone always asks me! I never really know what room I’m going to build next, but I’ve wanted to explore the attic of this house for a while.

“The Study: A Solo Presentation of New Work by Alec Egan” will be on display at the Charles Moffett Gallery (511 Canal Street, New York) from September 7 to October 1. 9.