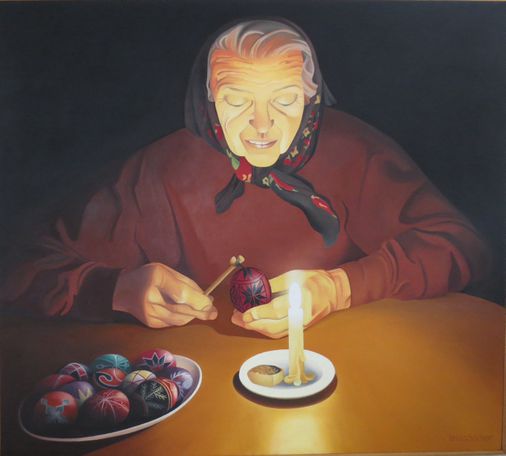 The Clinton Museum of Russian Icons is responding to the crisis by reassembling the Sochor exhibit “Pysanka: Symbol of Renewal,” which opened Thursday. The exhibit had already been installed in 2020 and 2021 and was still in storage at the museum when Russia invaded Ukraine.

Ukrainian Easter eggs (one is a “pysanka”, many are “pysanky”) are the subject of Sochor’s paintings. The intricately designed eggs symbolize prosperity, good health, abundance and fertility. When Sochor was a child growing up in Philadelphia, his mother taught him how to dye eggs.

“All of the scriptures on the eggs were directly associated with all of the symbology and allegorical magic that the egg contained,” Sochor said. “The egg is a trilogy. It’s the shell, right? And then the yellow ones represent the sun, and the white ones represent the moon. So you have this whole universe in this seemingly inanimate object. But, of course, it’s just full of potential new lives.

“For the ancients, it was really a sacred object,” she added.

The Museum of Russian Icons is eager to help preserve and celebrate Ukrainian culture.

“People ask if we are affiliated or funded by the Russian government or the Russian Orthodox Church,” said interpretation director Amy Consalvi. “Were not. We are a private non-profit association.

“We want to embrace all aspects of Slavic culture and all Orthodox cultures, not just Russian,” Consalvi added. The museum was quick to speak out against Russia’s invasion of Ukraine, posting a statement on its website condemning “military aggression against the sovereign country of Ukraine.”

“We stand with the brave citizens of Ukraine and Russia who oppose this senseless act of war,” it read.

Then the museum revived “Pysanka”.

In addition to paintings by pysanky, the exhibition features works that Sochor produced in response to the unrest in Ukraine – a trio of images of heads with babushkas painted in an icon style, on wood with gold leaf and acrylic, with Cyrillic letters. She did two during the Maidan uprising in 2014, when pro-democracy protests led to the ousting of Kremlin-backed president Viktor Yanukovych. The third, “Liberty”, with a white babushka, is a response to the current war.

“‘Mir’, written in the brown babushka, means peace,” Sochor said. “The blue is obviously just tears. But the actual title of this is ‘Homeland’ because I was crying for my homeland then, just as I am now. The last one, the white one, I just finish, and it’s “Volia”, which means freedom.

The artist still decorates Easter eggs every spring. This year, amid a growing humanitarian crisis – more than 3 million Ukrainians have fled the country since the war began – the ritual Sochor’s mother taught her seems even more important, she said. declared.

“We need to make more and more eggs this year,” she said. “More than ever.”

Here are some works of art exhibited in Massachusetts by artists of Ukrainian descent.

This representation of the Virgin Mary is Pokrova, a Ukrainian word meaning “Protection of the Mother of God”. “She is considered a protector of the country,” said Amy Consalvi, the museum’s director of interpretation.

She holds a veil called a rushnyk, a sacred Ukrainian textile placed over icons, crosses or graves. The brightly colored image depicts Mary’s apparition to Saint Andrew, during which she removed her veil and held it above a congregation as a protective talisman.

The museum draped a rushnyk decorated with the tree of life over the icon’s display case. “When a rushnyk hangs in the house,” Consalvi said, “it works like an amulet to protect the family.”

Archipenko was born in kyiv in 1887 and studied at art school there as a teenager before moving to Moscow and then Paris, finally settling in New York in 1923. His Cubist sculptures were among those that the Nazis confiscated and branded them as “degenerates”. His works were known for their unexpected colors, such as the blue and green patina of “Geometric Silhouette”, an abstract yet figurative piece.

The colors, said Marietta Cambareri, curator of decorative arts and sculpture at the MFA, can echo the brilliance of Byzantine icons dating back to the Middle Ages.

“We think of Russian icons, but there was a big icon school in kyiv,” Cambareri said. “It was a long tradition, and strongly felt.”

Nevelson was born near kyiv in 1899 and immigrated with her family to Rockland, Maine in 1905 as the Russian Revolution was underway. The Nevelsons were Jews, and pogroms killed Jews in cities like Odessa and kyiv.

“In Rockland, the Jewish population was quite small,” said Mary Schneider Enriquez, curator of modern and contemporary art at the Harvard Art Museums. “His mother apparently became very depressed. They wore traditional, formal Ukrainian clothes and stood out. His parents kept their roots.

Nevelson made “Total Totality II”, a large mural of stacked wooden boxes painted black, at the height of his success. Wood was a preferred material. His father worked in the lumber trade in Rockland.