Indradhanush, an exhibition of paintings from the Pichwai tradition by Yugdeepak Soni, crosses the realms of fantasy, culture and craftsmanship

Indradhanush, an exhibition of paintings from the Pichwai tradition by Yugdeepak Soni, crosses the realms of fantasy, culture and craftsmanship

At the end of the 16th century, the frontier regions of Mewar were a savage country inhabited by warring tribes and weary travelers on the old caravan routes that snaked around the Thar Desert. But its heart, a few hundred miles to the south, was dotted with lakes, and the colorful landscape where only wind-blown acacia trees remained gave way to verdant valleys, forests and ancient wells where bulls drew water. ‘water.

Here, in what is now the district of Rajsamand, was raised the Shrinathji Temple at Nathdwara, a center of pilgrimage for Vaishnavites and the birthplace of the pichwai tradition of painting. The paintings, mostly of Krishna with large eyes and a stocky build, earned their name because they hung behind the deity ( yell-behind, going-hang). Over the next four centuries, the Pichwai came to encompass various themes – the Ras Lila, Jain folklore, the pantheon of Hindu gods, the Hanuman Chalisa, scenes of court life and local flora and fauna – though it is Shrinathji as cowherd, holding Mount Govardhan and appearing to his devotees who still holds the fort. In a workshop as part of Indradhanush, an exhibition of Pichwai paintings, artist Yugdeepak Soni breaks through the cultural distance of this art form, drawing the outline of a woman on a handmade sheet of paper. hand after rubbing it with onyx. The figure is characteristic of the Mewar school, drawn in profile with almond-shaped eyes and a pointed nose. Soni fills in the colors of her skirt and bodice, line by line, using a fine-tipped brush, with the practiced ease of a painter who has spent years mastering form. 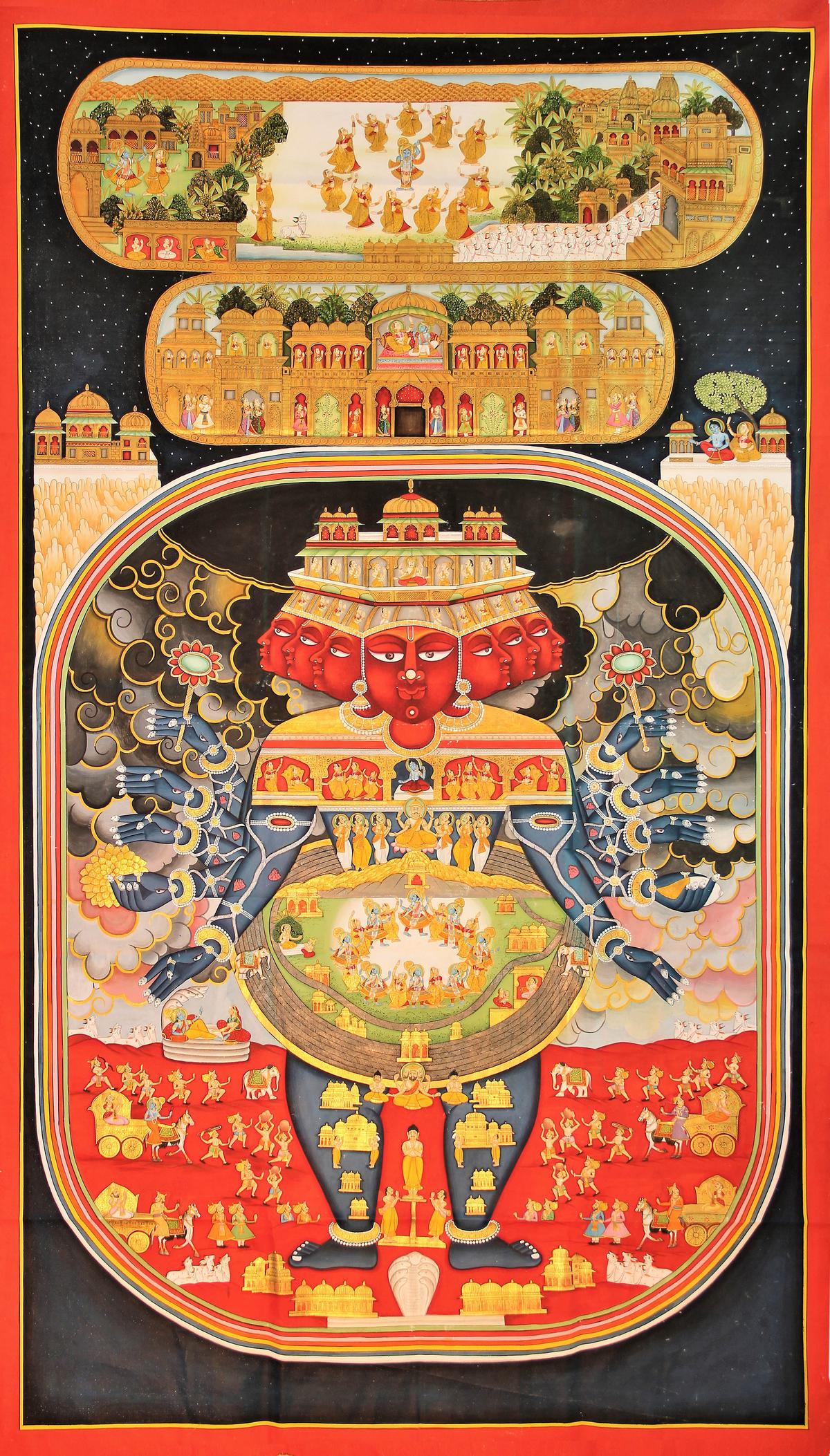 “My introduction to Pichwai came after I dropped out of school. I was sent to Bhilwara for a few years, to the house of my maternal uncle who had learned from my great-grandfather, the famous Badri Lal Chitrakar I felt comfortable with the brush, learning from the best how to make pigments, technique, how to play with colors, find inspiration and most importantly feel joy in pursuing it. has joy in you, the colors will find you,” says Soni, who now lives in Udaipur. “I’ve been painting for two decades, but I’m still learning. a single job takes months.Reading folklore, mythology, and observing cultural events helps ground the art, though some of the inspiration on how to apply the style comes from previous works.

Painted mostly on cotton cloth, muslin, or handmade paper, over time Pichwai evolved from temples to opulent salons and the raag-bhog-shringar (music, food and jewelry for the deity) to handcrafted vignettes of rural Rajasthan. The exhibition features 55 of Soni’s works, some painted during the pandemic, with a range of brushes and colors. “For the eyes and eyebrows, the single bristle squirrel tail brush is used, while the mongoose bristle brush is used for thicker lines,” Soni explains, adding that he uses indigo paints, metals and minerals and gold leaf, in particular. while performing Mughal and Rajput styles.

The paintings come in a variety of sizes, with the fabric panels being larger, and the paper ones more cluttered with elements. Banana trees hold their ground in a sea of ​​other trees, peacocks frolic as gray-blue-white monsoon clouds weave their way through a looping indigo sky, cows trot through the landscape and also line the well-defined borders while the women dance with dreamlike intensity.

The hanging display allows the viewer to engage with the painting and contemplate the detail of the artist’s steady hand. Ripe, rounded colors fill them, held back only by geometric precision. Fillers, like chattrisboats, lotuses and orchards are scattered in strange spaces respecting the theme.

Soni says he prefers to work during the day because the colors come out better in the sunlight. Among the canvases that stand out are Krishna Leela, filled with rows of dancers in gay abandon with Krishna taking center stage and Gopastami who has cows with his chin up gazing at Shrinathji. A towering cosmic Vishnu in midnight blue filled with mythical scenes, Soni’s favorite (Utsava) which has plump seated women on lotuses and cows on leaf pads around Shrinathji; elephants struggling with their trunks clasped in their arms, the gold of their clanking chains glittering in the light of the gallery; and the Gangaur festival, women gazing out of latticed windows as a parade of boats filled with men in bright pink turbans pass the ghat paying homage to the maharana, are a few that stand out.

Each of these settings is ethereal encompassing a world that oscillates between the spiritual and the cultural, much like the myriad landscapes of Mewar.