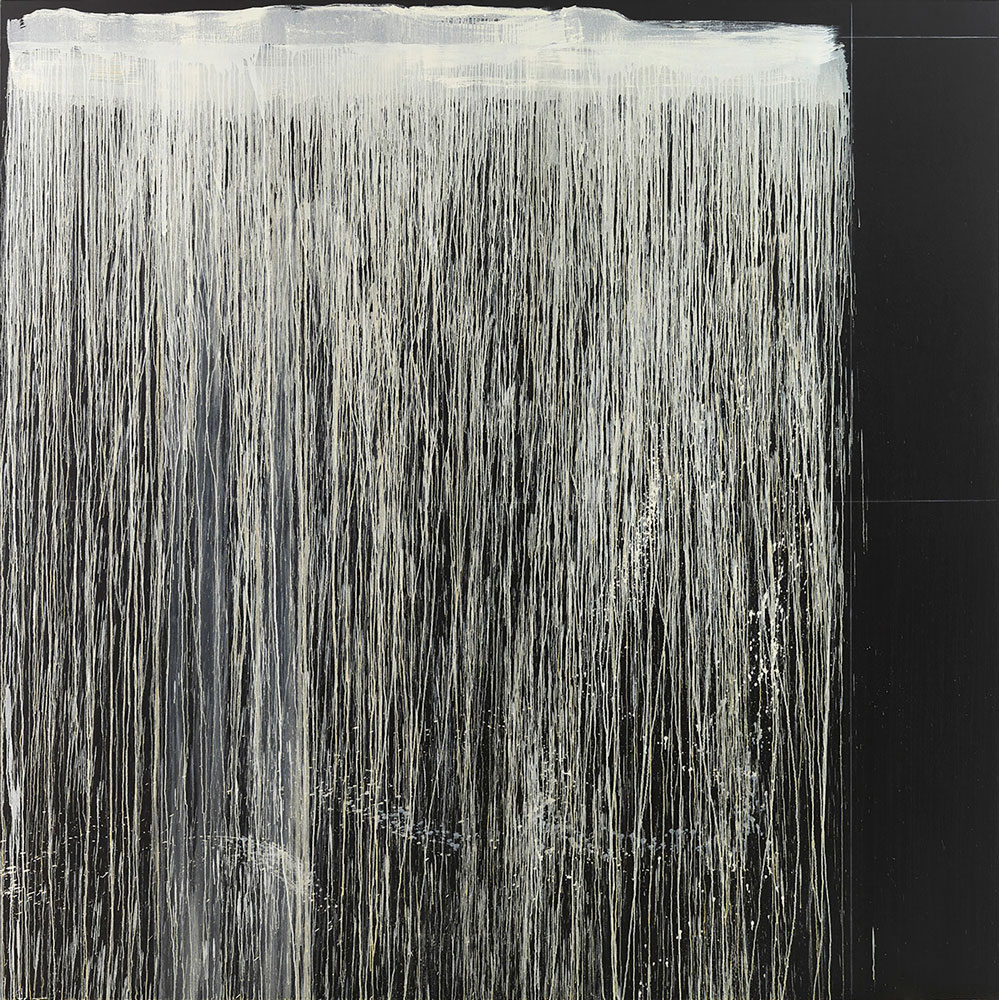 After arriving at the gallery, located on Via Francesco Crispi, a short walk from Bernini’s Palazzo Barberini, it took me a few seconds for my eyes to adjust to the August sun outside. Then all the subtlety and clear radiance of these cold and austere paintings had their full effect. This second iteration of a two-part summer exhibition by Pat Steir included eight paintings – six predominantly red, yellow and blue on black and two white on black. Barnett Newman’s attitude towards the use of red, yellow and blue was summed up in his series “Who’s Afraid of Red, Yellow and Blue?” (1966-70) and in the conclusion of his 1969 statement, “Why should anyone be afraid of red, yellow, and blue”, which is quoted in the exhibition’s press release. In his succinct response to the minimal, non-transcendent art of the 1960s, Newman invited an expressive and emotional response to color rather than a purely formal and technical response. Steir’s own contribution to this discourse on color and its meaning – as well as the absence of color, in the use of only black and white – is the central premise of this exhibition. Three tables titled pour red, pour yellow and pour blue (all 2021–22) make the link explicit. They are large scale vertical paintings identical in size to 132×60 inches. Black is not a uniform, unbent color: white paint diluted to gray, black in uneven drops flowing downward, finding many paths through the resistance of the canvas weave, overlapping and blending as and as you go. The color – red, yellow or blue – is central and flanked by black on each side. The tripartite compositions of Newman and Brice Marden come to mind. Each color occupies a very different amount of this central area and appears as traces of water on the rock: a record of moving liquid, or the memory of an event, now present after it has passed, in this precise but open form. .

In all the paintings here, cascades of paint released and subjected to the vagaries of gravity and liquid viscosity flow in rivulets which combine into beautiful aggregates. Chance as well as judgment make the paintings, allowing material and circumstantial agency. After the initial application of Steir from a loaded paintbrush, on or near the surface of the canvas, or a pour from a bucket or similar container, the accidental and chance recall the shrewd abandonment Indian ink painting or music by John Cage. All paintings are initially painted black and have ruled white lines that serve as guides for brushstrokes or slurries. Small Many (2021–22) combines red, blue, yellow, in a stack of short horizontal gestures that start at the lowest section; as they repeat higher up the board, the streaks of paint combine as drops and flow to the lower band of color. This 60×60 inch painting looks compressed and rhythmic unlike tall and imposing paintings. An afternoon (2021-22) is another painting in square format, much larger than Small Many at 120 × 120 inches. A line of repeated horizontal marks leaves a semi-opaque, uneven band near the top edge of the painting and releases a curtain or veil of white paint over black. There are sprays of white as well as drips like in Steir’s early “Waterfall” paintings. About 15 inches of the right side is left black, the horizontal not extending that far: the effect is to create a partial view or shape in the painting. Leaving the gallery after such a meditative and sensual experience, it proved impossible to leave the paintings behind. After all, remembering makes us who we are at least as much as what is currently in front of us.