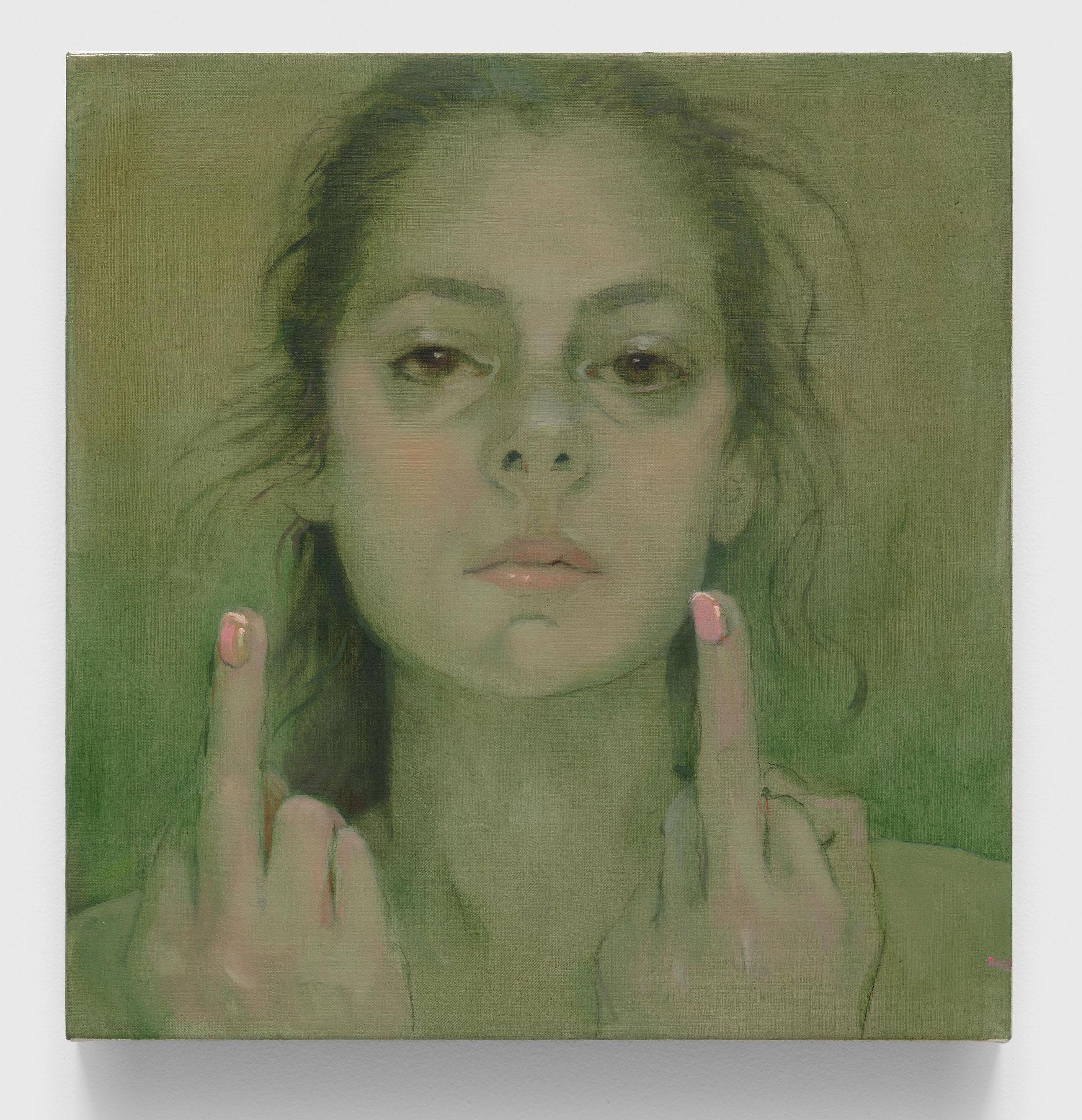 Exhibition by Lisa Yuskavage Wild region just closed at the Baltimore Museum of Art. The exhibition, across four rooms, was epic, with large paintings that traded with apocalyptic fantasy, exquisite and exciting brushwork, full bodies and the artist’s usually stunning color. I went there with my wife and my fifteen year old son, then we strolled through the fabulous collection of cones in the museum where I showed him the painting by Matisse. Blue Nude (Souvenir from Biskra) (1907). Her response was immediate and clear: “I can’t believe people think this is better than Lisa’s paintings.”

Matisse, among other Old Masters, gets the full Yuskavage treatment in his exhibition of 14 new paintings at Zwirner, displayed in two rooms. The first presents a few small canvases: a prismatic set of six oils on the entrance wall and two quasi-grisailles on the west wall, of which The Fuck You painting (2020), a half-length woman with a fiery expression turning the world upside down the double bird. On the adjacent wall is the large, vividly brushed Scissor Sisters (2020), with three conflicting partially clothed women (one with a gun) in a fusion of charlie’s angels, a photo of a similarly titled duo (2019), and Yuskavage’s hippie photos from 2013. The trio wear filibuster swagger, Daisy Duke, but won’t tolerate any bullshit. On the final east wall Tondo bonfire (2021), a rare format for the artist but containing a familiar image: a woman behind a huge fire about to bring down a long gun on an imageless victim. The beautiful blue sky behind the melting glow of the foreground belies the ferocity of the pattern.

It is therefore surprising to note that the large second room has only one large work on each wall. It’s a change from Yuskavage’s last exhibit here, in which ninety small images surrounded the entire space, and unlike the Baltimore exhibit, with its multiple smaller rooms with numerous works, most featuring sweeping scope, deep landscape backgrounds and high skies. Here, the four pictures all retreat into interior settings, with back walls parallel to the picture plane and defined spaces. On the entrance wall Pink Studio (Rendezvous) (2021) is, at 70 by 77 inches, just slightly smaller than an image taken exactly 110 years earlier, Matisse’s photo Red Workshop at MoMA, its clear predecessor. But whereas Matisse painted his studio as a quirky, somewhat wallless, almost variegated crimson display case for his more recent productions, Yuskavage gives us a glimpse into a more utopian space of mind, closer to that of the French artist. happiness of living (1905-06), the one who collapses the past and the present. An oculus somewhere above produces a ring of light over much of the composition, like the one you encounter in the Pantheon in Rome. It illuminates an interior chock-full of paintings, tools, multicolored globular balls that are either lights, fruits, or those huge translucent spheres resembling grapes/fish eggs that women feed on in Yuskavage paintings. (inspired by drug-colored dishes in Hieronymus Bosch Garden of Earthly Delights). Lupe and Lola Levenstein, posthumous portraits of her pet Chihuahuas, lounge on a dog bed, while in the right foreground an idle cigarette trails smoke through the air. In the background and continuing the illusionist orthogonals of Albertian concave space, stands a scarlet version of Homepage (2018), the artist’s notable work from his latest exhibition of new images, at the Zwirner’s East 69th Street location. Other scattered paintings mark the long arc of his career, such as Fat blonde with a hairstyle (1994) and The Boy of Sorrows (2015).

The absorbing stillness of the works signals a new intention in this piece, though their inviting nature is familiar. In some ways, the need to restrict our individual movements under COVID seems tied to Yuskavage’s shift in focus to where artists, over the past year and a half, have likely felt the most freedom: the studio. In his previous work, there are very few images of this type: his focus has always been more on models, of a genre, the studio implied. Now in the 86 by 120 inches of Yuskavage Evening classes at the Department of Painting and Drawing (2018-20), completed the suburban backyards of images such as art students (2017) gave way to a spacious studio, imbued with many shades on the spectrum from pink to red. Two mostly naked female models share space with a boyish man – he has Donatello David‘s teen pot belly. He wears glasses and sports a curved gourd of Magrittian in his lips which parallels his flaccid penis below. On the left, the composition is framed by an impressive pile of audio equipment and cables. In the back, a model with a garland of flowers in her blonde hair is crouched on a sheepskin, her bowed head framed by a canvas on an easel featuring a bright lemon underlay. She is similar to the woman seen in the artist Braque’s workshop images (2010) and is flooded with directed light that contradicts the image’s time of day, a diagonal splash of Yuskavagian illumination that is more conceptual than naturalistic, like that of Caravaggio Call of Saint Matthew (1599-1600). On the right, a standing woman wearing only high striped socks and a fabulous turban marked with iridescent blue highlights to match her eyeshadow is also framed by a primed canvas on an easel, here a blue sky scene with wispy clouds. She looks down at the curly-haired man, who slowly and deliberately runs his fingers along his ribcage, while a trail of smoke rises from his pipe. In the foreground, a block of wood bears two upright nails, two others lying nearby, another reference, perhaps, to Braque, and his Violin and Palette (1909) at the Guggenheim, where the nail on the upper wall on which the painter hung his palette casts an illusionistic shadow, a visual pun against the hard-earned, faceted, analytical Cubist formal language of the rest of this picture studio. Things are built in studios. There will be nails. Among other instruments of passion.

In Yellow Studio (2021) a single female figure sits on a draped stool just left of center. She watches her left hand fiddle with her right foot, which rests on her left knee, thus adopting the opposite of the famous pose of the Spinary, the boy removing a thorn. Dating back to Hellenistic times, this sculpted genre figure has had a surprisingly robust afterlife, known from many Roman copies, then adopted by sculptors and painters since the early Renaissance. This is probably because, like contemporaries Dying Gallic trumpeter (Gaule mourant), early examples were in well-known collections, and both were readily adapted to the poses of the sitters in life drawing lessons in 17th century art academies, though unlike the doomed but determined Gaul, the Spinario bears little reference to the broader human condition. Yuskavage nonetheless imbues this communal scene with liveliness and humanity. This may pass through the example of Seurat, whose grandiose The Poseuses (The Models) (1886) in the Barnes Foundation artist’s hometown of Philadelphia, also features the pose, modified, in the pensive semi-nude model to the right pulling down her stockings. The Post-Impressionist Pointillist lent these working-class women a gravity commensurate with their monumentality, and only one of them seems aware of the artist/viewer of this image. Yuskavage’s model in the Yellow Studio is also oblivious to any other presence in the room. She looks like one of the artist’s familiars nel’zias characters, nebbishy, ​​buttoned-up female spirits that linger in Yuskavage’s imagination in the studio and at the margins or background of his images, supposed checks on his basest instincts, but thankfully almost always ignored. Here the nel’zia is unattended, the image of straightness removed, her hair spilling out of her headscarf. With a shiny turquoise napkin painted in Michelangelo’s Proto-Mannerist cangiantismo, against the general mango tone of the image, it recalls a scale and a pose that combines the muscular ignudi of the Sistine Chapel ceiling with the great sibyls on the sides of the ceiling. His flexed left foot, with its pronounced big toe, is the double of the foot of the Libyan sibyl, the sketch of which is in the Metropolitan Museum of Art, my favorite drawing in the United States.

Delicious lollipop colors. Divine use of light – a caressing light. The practice of making fictions that make us live. Complexity and retrospectivity. What is Yuskavage looking for in these works, with their comparatively reserved pictorial virtuosity and wide expanses of almost homogeneous color? I can only say what they remind me of. And it is so. It looks like Chelsea’s most confident piece, as bold in its own way as the stunning array of 1969-79 photos by Philip Guston (one of their heroes) currently at Hauser & Wirth. Witness the reference range of Yuskavage, the mastery of its materials, the large scale of the works, the desire to strip its own work, the complete control of the entire color spectrum, the way these images encourage both absorbed contemplation and aerobic observation, moving back and forth and back and forth. The thrill of turning around to see them across the room in the perfection of the natural and artificial light of the Zwirnerian Salon Carré. The stories still need to be told. Female bodies bear the cool commandment of Yuskavage, and they productively disturb, women’s interactions with men remain blurred, power relations shift, and the time period is unspecified somewhere in the ‘aesthetics sexuality of the 1970s”, according to Helen Molesworth’s assessment. . You make culture the old and the present. In your inimitable way. Matisse could barely direct it now.

David Zwirner presents abstract paintings by Jesse Murry, part of a series of exhibitions dedicated to artists who died during the HIV/AIDS crisis