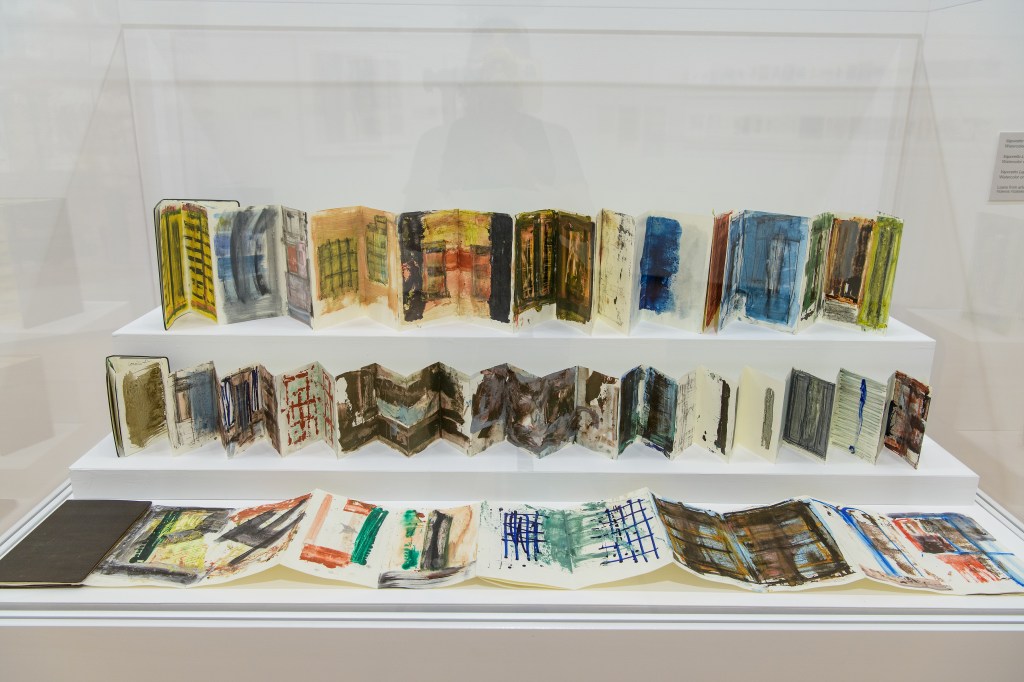 “It is not easy to write about abstract painting,” the late artist Louise Fishman once said, expressing both a general truth and a personal concern. Perhaps finding paper—a medium for verbal and visual articulation—to be most helpful in helping him negotiate this dilemma, Fishman annotated many of his works on paper with all-caps script, an ever-growing set of diaristic fragments and ideas that run through this sensitive and immersive investigation of his drawings. “It’s working-class Jewish lesbian art. In case you didn’t already know,” one pencil sketch coyly asserts from 1973. The image depicts an idiosyncratic pie chart in which a circle is divided into segments of varying shades accompanied by scoring internal speech. Fishman’s internal dialogue is alternately scolding (“not hard enough”) and vulnerable (“What I often forget is that headaches have afraid – these 3 drawings are afraid”), which makes the otherwise modest piece feel like a meaningful summary of her perpetually interrogative practice, which has thus far been defined by her large-scale paintings.

Spanning the course of Fishman’s career, from his years in the MFA program at the University of Illinois in the early 1960s through 2018, the more than one hundred works on display at the Krannert Art Museum come almost entirely from Fishman’s personal collection and most have never been exhibited before. Avoiding a linear and developmental structure, the exhibition, curated by the museum’s curator of modern and contemporary art, Amy L. Powell, in close collaboration with the artist who died just a month before its opening, is instead organized according to The Grammar formal version of Fishman, with sections titled “Transfers”, “Grids”, “Curves”, “Flat Folds” and “Expressions”. Inside each, graphic and pictorial gestures, chronologies and materials collapse and intertwine. In “Grids,” for example, a thick, blocky oil-on-paper drawing from 1975 appears alongside a vaguely scribbled oil-and-stick painting from 2001; in “Curves,” a grid of broad cross-hatches from 2001 hangs alongside a series of sketchy ink-on-paper horse silhouettes from 1995. Walking through the galleries, one becomes attentive to Fishman’s creative strategies but also detached of their specificity – see, on the contrary, how they have fueled a continuous process of invention and revision, disclosure and occlusion.

The exhibition’s most cohesive form is the accordion-style leporello book, nearly a dozen of which are scattered throughout the exhibition, their interiors unfolded to reveal intricate paintings that embrace the rhythm of sequential images or cross the pages to create a continuous whole. Fishman turned to leporello in 1992, after a fire destroyed her studio, along with all of her art and possessions. It was a crippling trauma that she slowly reconstructed from filling the small pages of these little books, whose origins can be traced to Don Giovanni’s long scroll of romantic conquests, as well as a Buddhist tradition in which pilgrims recount their visits to sites. . on the Buddha’s journey to enlightenment. Channeling both lines, Fishman’s books often specifically address lovers past or present and serve as meditative records for his varied formal approaches. They also act as collapsible works that combine literary and artistic associations, begging to be both read and seen. abuse book (1993-1994), a particularly powerful example, is dedicated to her former lover Bertha Harris. Its pages shift from torn, scooped, and crudely layered black-and-white painted collages to darkly hued color fields with a bright central notch; halfway through the book, the gash slowly becomes the focal point of the composition and transitions from a watery brown mark to a crisp column that eventually bursts into a vibrant, colorful grid. Such transformations give the sense of a narrative arc, from a tangled tumult to an erotic climax that resolves into ecstatic clarity. Although less explicit, this narrative impulse, once identified, is found throughout the show, whether in Fishman’s intermittent self-reflections, the trajectory of his gestural experimentations or his more serial imagery. Another book, from 2013, is listed: For the beloved, my love, Ingrid on your birthday on April 9, 2013, your loving and passionate and always trembling wife, Louise– a love story written in drips, smudges and puddles of sensuously saturated green, yellow and blue paint interspersed with Ingrid’s clippings of hair.

In a 2016 interview, Fishman explained, “It’s always been a problem for my career that I’m one, queer, two, one woman and three, doing old abstract paintings. It doesn’t have the subject matter you see in other lesbian work – subject matter that makes things more accessible and easy to write about. This tension – between readability and illegibility, abstraction and representation – is at the center of this exhibition. And leporello’s books—private artifacts, here made public, that can be expanded into near-epic compendiums of a lifetime’s emotive tokens or whittled down to pocket archives of affection and art—feel like his intimate guidebook.

The Artist Travels to Fantastic Places in Exquisite Oil Paintings