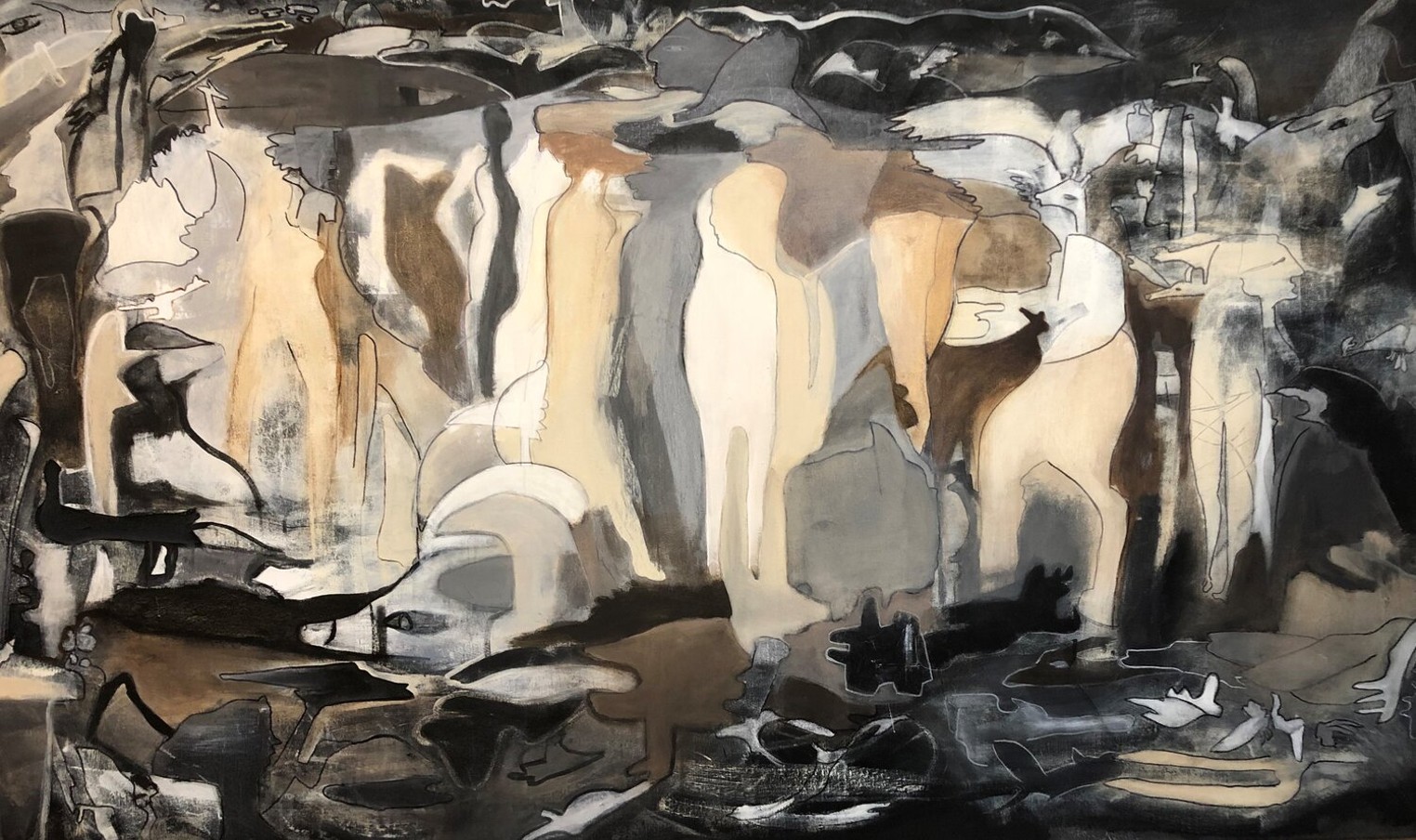 Kristina Davies on the power of her “deeply rooted” abstract paintings

When the Denver artist Kristina Davies took to painting her massive work “Deeply Rooted”, she had just discovered Lizzo and his 2019 album, Because I love you. The painter, who had just retired from a teaching career, moved and danced to the record while creating her piece.

Her process, she says, is often fueled by music and guided by intuition. “Sometimes I have my eyes closed. Sometimes I have both hands. So I feel that, and when I do that I feel like I’m very tapped into a more spiritual and meditative essence of our humanity. And it’s timeless, and it’s archaic, and it’s ancestral.

“Deep Rooted” Inspired interconnectedan exhibition of Davies’ large-scale abstract pieces that the new street art-oriented gallery WAART installed at Prosperous baseball stadium, 415 Park Avenue West, from May 21 to the end of June. (There is an opening reception on Friday from 5-9pm)

The figures and forms of “Deeply Rooted”, Davies explains, emerged from the canvas, and his job was to bring them to life. “If you look closely at this painting, it looks like a lot of human shapes, but there are also a lot of animal shapes on the outside.”

She painted in Globeville and the location influenced her work.

“These are buildings that have been modified from an old meatpacking plant,” she says. “I feel like when I paint I capture the story of the earth, the story of our interaction with animals and the environment, with ourselves, with each other, with the universe , with our ancestors.”

Davies has been drawing and painting since she was a child, when her mother encouraged her to express herself freely. And soon Davies fell in love with painting.

“There’s something about the brush and the stickiness of the flow of paint that appeals to me,” she explains.

Over the years, she drew inspiration from her peers in the Denver art scene and the Abstract Expressionists, especially women such as Lee Krasner, Elaine de Kooning, Grace Hartigan, Joan Mitchell, and Helen Frankenthaler.

“Honestly, I don’t feel better anywhere in my life than when I’m painting,” she says. “So the act of creating is so enjoyable, because I feel like it’s a time where I’m really in the moment.”

For Davies, art also has a therapeutic function, which she has put to good use during the pandemic.
“Art heals,” she says. “So it’s been healing for me during COVID, man…and it’s still going. But the quarantine last spring? It was my saving grace to be able to paint and be creative. Art is “not that thing that has to be super nerd, or super this or that. It’s raw. It’s what makes us human.

And he has the power to change the world.

“We can do better than what we have been doing,” she said. “I think social change is needed. It was necessary, if you look at it every period, we needed social change.

When it comes to her works, Davies says she wants to evoke wonder and give viewers a chance to connect. “There’s this idea of ​​finding something there that maybe helps them make sense of the world in an intangible way.”

What she loves more than anything is how people react to abstract art, and as she prepares for her installation in Thrive, she can’t wait to see the size of her paintings blow people away. .

“A lot of them are really tall, so I think people like it when they see my paintings for the first time, seeing their height,” she concludes. “They’ve seen them online or on Instagram on this little screen, so I think it’s pretty exciting when they can see them in person. And then when you can see all the textures and layers – because a lot of my paintings have so many layers, like twenty or more layers – I think when they see that depth, it’s exciting for them.

interconnected runs from May 21 through the end of June at Thrive Ballpark, 415 Park Avenue West. There will be an opening reception from 5 to 9 p.m. on Friday, May 21. For more information, visit ARTOS website.

Oil paintings by Lê Phổ and Claude Venard stand out at the Neue Auctions Modernisme sale, May 15