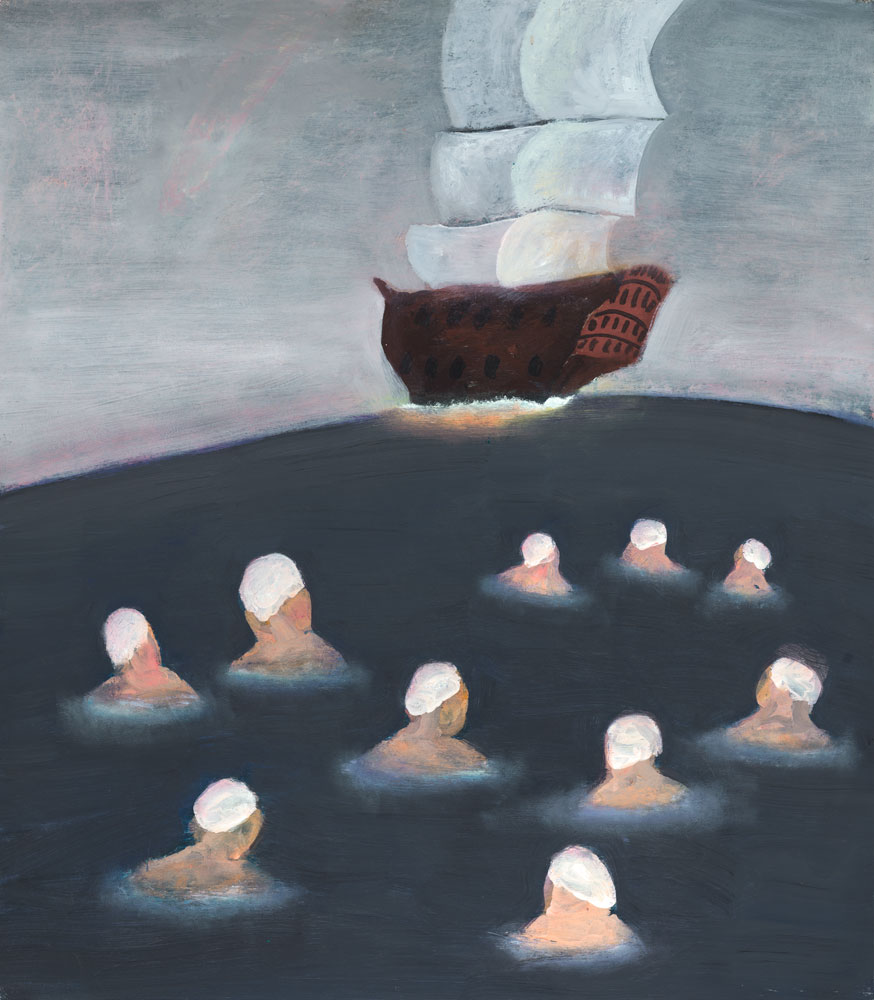 “Full circle” is the phrase that comes to mind about Katherine Bradford’s exhibition Flying women at the Portland Museum of Art. Organized by Jaime DeSimone, these forty paintings cover twenty-two years of her life as an artist, an existence that began much earlier in Maine when she was the wife and mother of young twins. Now eighty years old, she returned triumphantly, a grandmother with her own wife.

A textbook-like timeline in the show’s pocket charts notable dates and events in Bradford’s life, highlighting his unusual backstory. She attended favored educational institutions for young women—Miss Porter’s School and Bryn Mawr College, married a Yale law graduate descended from Mayflower Pilgrims, moved to Maine among the seventies wave of return to the earth and became a mother. When the voice of her true calling became deafening, Bradford got divorced, moved to New York in 1979 with her son and daughter, and figured out how to become the artist she wanted to be in the community she wanted to join. . This alternation between meeting his needs as an individual and his needs for connection to family and community is articulated in his own words in the wall tags but, more importantly, manifests in the paintings.

The oldest and most recent of the six of his superhero paintings included here encapsulate this dichotomy. In flying woman (1999), the star image of this show, Bradford’s mature putto on leave from a fresco disguises himself as a hero’s cape. It is an economic emblem for its struggle to “steal”. She describes feeling “exposed”, “vulnerable”, uncertain that her aspirations are within reach as an artist. Compared to her younger, better-educated peers, trained in color theory and figure drawing, Bradford may have felt under-equipped. However, she had a superpower: her way of conceiving images that were both prose and poetry. It’s relevant again in Super hero (2020). This painting depicts four women dressed in spooky outfits consisting of tights, skirts, and mismatched socks. But despite their individualistic costume, they share a red cape. Is Bradford suggesting we’re stronger together?

Throughout this exhibition resonates an echo of 80s figuration. In Bradford’s early days in New York, this loose category of painting was everywhere in galleries and magazines. Its flying figures, nocturnal scenes and saturated colors recall those of Robert Yarber and his woman in water (1999) nods to the blurred outlines, color fields and minor cropping of figures used by Susan Rothenberg (whose Skowhegan lecture Bradford attended in 1975). Nor is it an exaggeration to link his poetic allegories to those of Francesco Clemente. But Bradford is William Carlos Williams for Clemente’s Ezra Pound. The foundations of Bradford’s paintings are his life and his world, while Clemente borrowed from distant cultures, the Mughal Empire, for example. Perhaps Bradford’s most exotic subject is its ships, which, if you’re in Maine, don’t say much.

What sets Bradford’s use apart is that the ships appear to function as figures. After all, the woman as vessel is a cliché. Ships use pronouns, make maiden voyages, unload people and goods from their holds, and sailors sail by the stars. His Mothership (2006) depicts swimmers returning to safety as fledglings return to the nest. In Sargassum (2012), a container ship is attached to the ocean surface by string lights. The painting is reminiscent of Macy’s parade balloons anchored by multiple ropes. Escape from the ends of the earth – or not – is one of Bradford’s main themes: boats and swimmers float, superheroes fly or try.

The latest paintings give something different, a sense of arrival. Bradford’s move from oils to acrylics, completed in 2016, brought about tactical adjustments. For example, Bradford might choose to paint on raw canvas rather than primed canvas. Since canvas cannot be faded and the window to handle an acrylic layer is shorter, safety and speed matter. Never question yourself. Bradford simply veils an oops, like the ghostly Guston shoe in fear of shoes (2018), and is moving forward with another thinned color swath. She is not difficult. Once it gives you enough information to make an image readable, it moves on. Polish? Virtuosity? No. Bradford’s gift with painting lies in his take-it-or-leave-it candor. His awkward figures are largely vertical or horizontal. The flexed limbs form ninety degree angles. Images are rarely placed in recessed space and are instead gridded on the image plane.

As Bradford hit his stride, his figures exploded from doll-sized to monumental. With multiple characters in shared activities, the content has become more overtly connected and also more direct, so that when she paints herself, she’s no longer apologizing – she’s no longer covered in a cape or rendered in the shape of a ship. In Mother Paintings, his latest New York show, Bradford emphasized how connected we are. It is a provocation in itself. Aren’t we more used to contemporary culture lamenting our existential loneliness? Maternity (2021) is one of Bradford’s recent lap-sitter paintings, images evoking the safety and comfort we all wish to on some level return to, and resonating especially in the dark days of the pandemic.

In shirtless couple (2018) Bradford’s journey to life’s sweet spot seems to have peaked. It is the antithesis of vulnerability in flying woman. In the most recent painting, two women with blue hair are seated side by side. One, shirtless and cross-legged, affectionately drapes her arm over the other’s shoulder while the other faces the viewer with her blouse open, nipples visible. Finding yourself unexpectedly shirtless in public is the object of anxious dreams for many women. Still, these two are portrayed as relaxed and confident and, what’s more, the way Bradford painted them is just as relaxed and confident.

Enviable from all points of view.