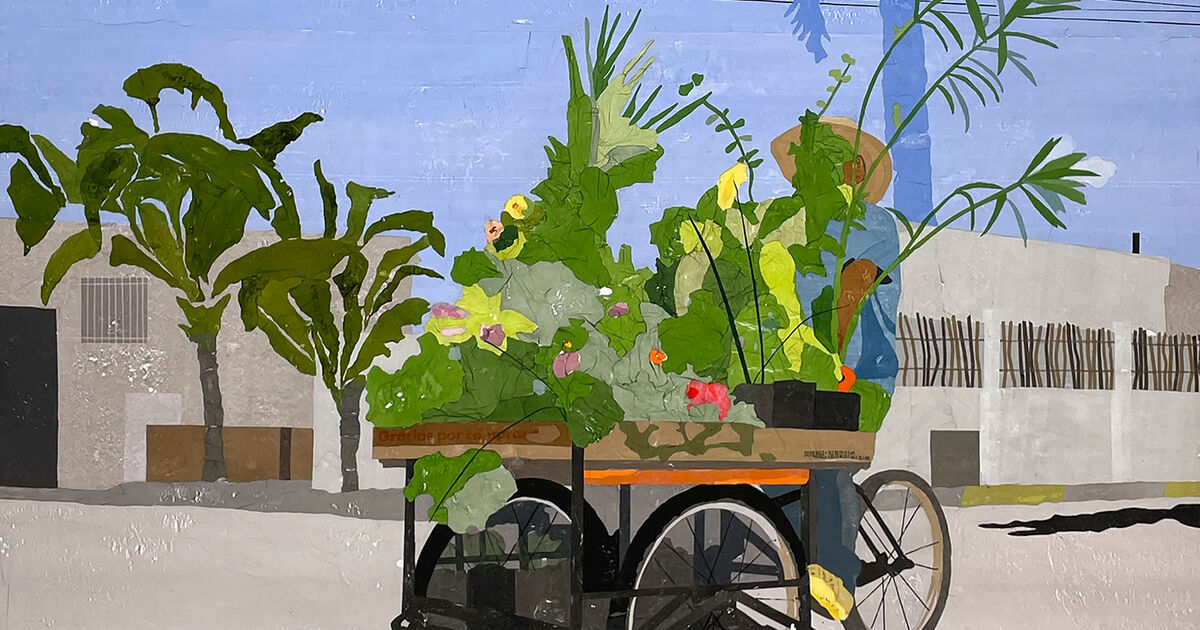 “Don’t let darkness be a recurring theme,” Hugo McCloud was continually reminded as he worked on his solo presentation with the Sean Kelly Gallery at this year’s Armory Show and his upcoming exhibition at Vielmetter Los Angeles. His latest figurative paintings, titled “flores de mayo” variations, will be on display in the Focus section of the New York fair September 9-11, while the Vielmetter exhibit will feature new versions of early career stamp paintings. by McCloud.

“The background the paintings come from may be dark, but my images are not,” he told Artsy from his Los Angeles studio, where McCloud recently moved after residing in Tulum. in Mexico. The protagonists of his Armory presentation underlie this visual optimism. Flowers, particularly those the artist has photographed on the handcarts of vendors in Mexico, are the subject of paintings that challenge the natural essence of botany through McCloud’s choice of artificial materials. Single-use plastic bags replace the established order of paint to capture the exalted hues and velvety lushness of flowers.

Layering pieces of plastic in soft arrangements, McCloud orchestrates bouquets with silhouettes of trees in the background. The understated elegance of the flowers silently addresses the flawed commercial network through which McCloud obtained the plastic bags. “They still carry the weight of individuals pushing them on tricycles,” the artist added, commenting on the invisible work veiled beneath the floral beauty. “But my approach is a bit more on the border of abstraction now, creating my own language with plastic.”

Entering quarantine during the COVID-19 pandemic has given the artist a better understanding of the different ideas that interest him. The work has always been a subject, whether through its immediate and practical relationship with the canvas (or once with objects like a designer), or its observations of others working on the streets of India or Europe. South Africa.

“I come from a family of workers, from my grandfather who came to America and opened a junkyard or from my mother who is a landscaper,” he explained. “I have always been humbled by individuals who try to create more with less.” The stamp paintings that put it on the map less than a decade ago included materials used for roofing. “I started by frequenting supply stores to acquire industrial materials to make art,” he recalls. The material inspiration for his abstract paintings on aluminum in “Palindrome”, his first exhibition at the Sean Kelly Gallery in 2015, is the fruit of his encounter with slums in Johannesburg.

A similar curiosity for the forgotten also guided McCloud to the material for which he is perhaps best known today. Single-use polypropylene bags first appeared on the streets of India in 2013. The material did not cooperate for nearly four years until it understood the chemical language of plastic.

McCloud began collecting discarded sacks on the streets to make paintings of anonymous individuals pushing, carrying, or driving masses of goods, also on the streets. Iconography came to him around 2017 when he rented a 300 square foot studio across from street vendors in Mexico City. “I’m not focusing on that exact individual,” McCloud said of his characters’ anonymity. “My focus is on the process and the willingness of the individual to do what it takes to work that day – there’s beauty and strength in that.”

In addition to their socio-political connotation, the piles of bags alongside the human figure offer the artist the pictorial challenge of imbuing unwanted material with emotion and intrigue. McCloud found himself captivated by “the value of the overlooked”, as he described it, and eventually expanded his investigation of the material on a larger scale.

At last year’s Art Basel in Switzerland, the Sean Kelly Gallery exhibited the four-panel 90-by-282-inch painting Man’s Burden: Waiting to Breathe With (2021). Given McCloud’s later foray into still lifes, the work hints at a departure from figuration by providing a more abstract visual lexicon.

“I’m not the painter people imagine – I don’t paint with a brush on a canvas with an easel,” he said. “I deal with materials by discovering engineering and proposing my own technique.” This path, however, requires compromise and patience. “Plastic is a material like no other because there’s no fluidity – it’s unforgiving and very fixed,” McCloud continued. Once ironed over the panel, the plastic strip offers no turning back. Therefore, each painting must stem from a premeditated decision as to its balance between pointed figuration and hints of abstraction. “I’m still trying to figure out how to capture fluidity,” McCloud admitted.

His new works “flores de mayo” which present trees in silhouette imposed this challenge: “My trees are the same color as the sky because they are vague and undefined shadows, so I realize that the key is to create another layer of sky but darker.” said the artist. Through her use of materials, McCloud has proven that other possibilities of beauty can be discovered in what most consider disposable.