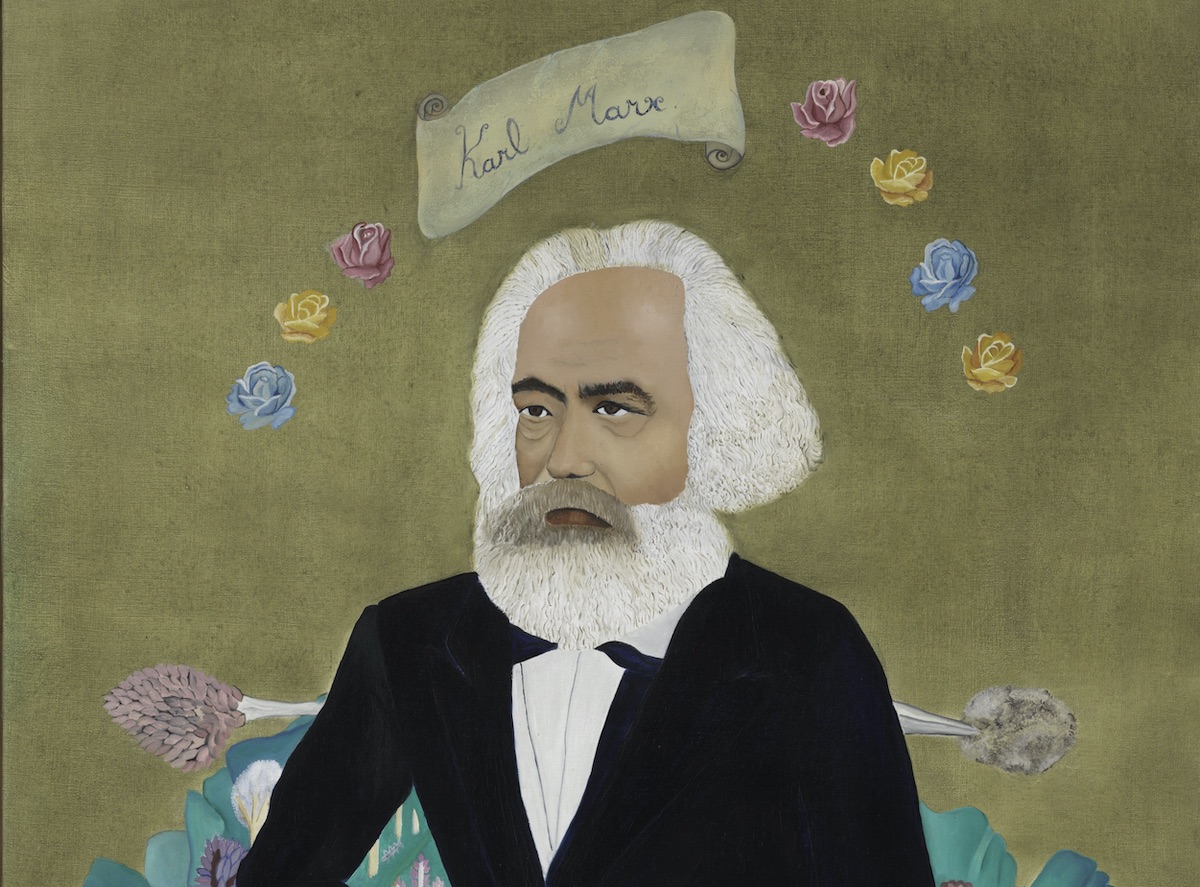 In 1972, Cecilia Vicuña left Chile for London to study fine arts. The following year, Augusto Pinochet launched a bloody military coup, transforming the country into a neoliberal dictatorship. In this new political climate, the freedoms celebrated by the government of Salvador Allende are threatened. Fearing for the safety of Vicuña’s work, Nemesio Antúnez, the artist and then director of the Museum of Fine Arts in Santiago, hid the painting Karl Marx his home. To protect the work from the authorities, he painted over the philosopher’s name and replaced it with that of another radical, Charles Darwin.

Superficially, Antúnez’s decision may seem ironic or playful, given that Darwinism throughout the 20th century became the worldview of the reactionary right in search of ideological justifications for inequality. But for much of the early communist tradition, Marxism was a science that sought to explain the historical development of human societies. The juxtaposition of the two men is perhaps fairer than we think. Nevertheless, the representation of Vicuña of the author of Capital as far from any scientific idea of ​​socialism as one can imagine.

“To exalt Marx, I wanted to associate him with . . . eroticism, poetry, blues, jazz and rock, female and homosexual liberation”, wrote Vicuña in 1972. Her image of the theoretician stands against a psychedelic garden, adorned with trees whose branches extend like intertwined hands and populated by naked figures in full effervescence. of sexual embrace.

Obviously, his description of Marx tells us more about his creator than about his subject. Born in Santiago, Chile in 1948, Cecilia Vicuña was a strong supporter of Salvador Allende and lived in exile as a young adult after Pinochet’s violent coup. Recognized as both a visual artist and a writer, she published her first collection of poems at the age of nineteen and co-founded Tribe No, an arts collective that engaged in performances, readings, and protests against the social conservatism of the time. In 1971, she wrote a playful poem titled “Luminosidad de los orificios” (Luminosity of the Orifices), which celebrates the spiritual qualities of bodies and their various holes. His performance shocked audiences at the time and went on to have mythical status in Chile’s cultural history.

After having lived between London and Bogotá during her first years of emigration, Vicuña settled permanently in New York in 1980. If the Big Apple became her homeland, she made brief stays in Ecuador, Peru, Bolivia, Argentina and parts of Chile that retain a strong indigenous heritage, such as the city of Temuco. These inter-American travels brought her into contact with indigenous customs and artifacts with which her works often interact.

At the heart of these encounters was the recognition that the knowledge produced by indigenous peoples has a value that deserves to be preserved and from which lessons must be learned. Its purpose is to save the quipus, recording devices formed from knotted cords originating from the pre-colonial Andes, using them in his artistic practice. In Quipu of exterminio (Extermination Quipu), the main installation of her recent solo show at the Guggenheim, she reuses these techniques to produce streams of fabric that hang from the gallery ceiling.

As one begins to climb the museum ramp and heads towards the High Gallery, one can notice ropes and knots like lightning falling on each visitor’s head. Shells, stones, pieces of wood and irregular wire shapes hang from these threads. There are three: red, white and black. Hanging, they interrupt the murmurs of the varied faces that look down.

The most important record we have of the original use of the quipus is that of Felipe Guamán Poma de Ayala. The First New Chronicle and Good Government. Accompanied by numerous drawings, this text by a noble Quechuan summarizes the past of the Incas, as well as their anxieties at the start of the colonization of Latin America. While the Spaniards considered the indigenous communities of Peru inferior to their Aztec or Mayan counterparts because they apparently lacked a writing system, Guamán Poma observed that the series of threads contained notes of calculations, myths and genealogies of his kingdom.

He insisted that the quipucamayocsscribes or accountants of the Inca Empire, “had such an ability that everything known about the strings seemed [him] in letters. With the ropes they ruled everything [the] Kingdom.” The Spaniards, believing that the quipus were idolaters, ordered their destruction at the end of the 16th century. While Guamán Poma has given us a good idea of ​​their function, their precise meaning has been lost over time.

This cultural tragedy is taken up and made productive in Vicuña’s work. In its elegantly crafted strands of rubble, we can reflect on past and present attempts to exterminate traditions and ecosystems, and their refusal to completely disappear. By reproducing the technique of the Incas, Vicuña forces us to reflect on technology, the value of progress, and the rejection of the past that it often justifies.

Vicuña’s use of the quipus motif is not limited to sculpture. In the painting Menstruation Angel (Angel of Menstruation), a celestial female being seems to turn on itself, her body encircled with a red string. Rejected in this image any notion of prudence but also of splendor, both in the formal style of the work and in the simplicity of its subject.

Not all of Vicuña’s plays function at the level of a positive recuperation of the indigenous past. In Sueno (Los indios matan al papa) (Dream [The Indians Kill the Pope]), a revenge fantasy is staged. The Holy Father prays and stares at the viewer, his expression empty, dispassionate. Around him stand representatives of the Tarahumara, Yahgan, Maya, Aymara, Bororo, Mapuche and Apache nations with their weapons pointed and ready to fire. On their faces, expressions of joy: killing the pope is not a bitter act of resentment but a source of collective happiness. “Perhaps it’s time to try a new revolution; not violent but a revolution of love,” Vicuña said in 2017.

Amados (Loved Ones) depicts the artist and her lover adorned with a collection of religious and political icons, each floating against a russet background. Their members include Salvador Allende, Saint Teresa of Jesus, Buddha and Aretha Franklin. What unites these characters, more than any ideological affinity, is their recognizability as surrogates for a particular cultural mood. It is perhaps helpful to see Vicuña’s work as a kind of postcolonial pop art playing with social and political memes.

“I am great, I contain multitudes,” Whitman wrote in his song of me. The line has become a cliché, but it reflects the kaleidoscopic intent of Vicuña’s work, which condenses past and present, Global North and Global South, utopia and dystopia. Despite this, the lives she evokes in her fabrics, paintings and poems are anything but fanciful. In her wanderings through the Americas, Vicuña has condensed within her a continent without concise definition, which has drunk the waters of rivers so different that it can only grow asymmetrically. His affinity for the nomadic nature of certain pre-Hispanic nations and his radical yearning for an identity that does not necessarily embrace all aspects of modernity inevitably render his approach dissociative. Allied to this, however, is a radical sincerity – a commitment not to betray oneself or the many selves who have allowed it into our world.

“Hats Off to All People! Acrylic Paintings by Robin Coyner – NWILife