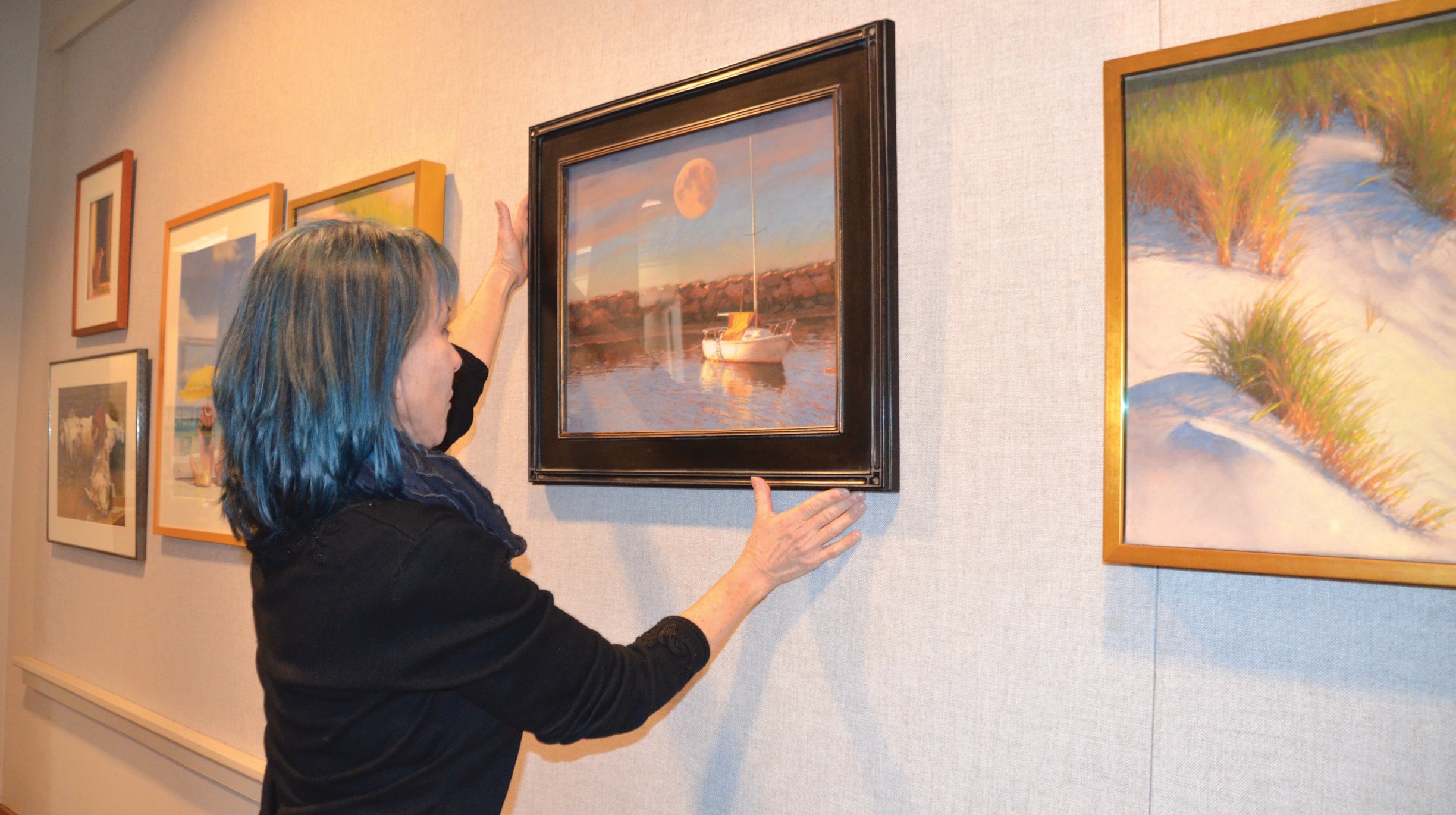 Cynthia Blair of Seaside Drive hangs a painting for her exhibition in the lobby of the North Road Library. The show is sponsored by the Conanicut Island Art Association. The exhibition continues until May 25. PHOTO BY ANDREA VON HOHENELEITEN

Visitors to the North Road Library can now view a collection of vibrant paintings by one of Conanicut Island’s most prolific and versatile artists.

The exhibit that hung in the lobby last week includes ‘Drifting’, an oil painting from his ‘Small Boats’ collection which won first place at the Conanicut Island Art Association’s 2008 Members’ Show.

Blair, who earned a bachelor’s degree in illustration from the Rhode Island School of Design, explained the inspiration and technique behind her traditional artwork.

“I used a terracotta-colored base color and painted with dashed strokes over ‘Drifting,’ so the base color really showed through,” she said. “I often use an orange-red base color opposed to the subject’s predominant blue color.”

She said the color complements play off each other, giving her oil paintings their visually pleasing vibrancy and movement.

Some of his more detailed work can be found in pastels like “Aussie Blue Eyes” and “Cardinal Red” from his “Small Creatures” collection. Blair’s subjects come to life in these works without looking like photographs.

“I use smaller brushes or pastel pencils for details, but I try to keep it loose,” she said. “I don’t want a painting to look like a photograph. I rather want to give an impression of movement and depth.

Blair said photography comes into play out of necessity for paintings like “Run with the Waves,” which places the viewer right on the beach with a young boy playing with a toy sailboat.

“For a moving subject, in the style I painted it in, a reference photo is needed to capture light and reflections accurately,” she said. “It’s always about light first, shadow second. Light defines the form, gives it mass.

As for inspiration, Blair said Jamestown abounds, which is why she’s made the island her home base for the past 20 years.

“There’s inspiration everywhere you look,” she said. “I love our mix of open spaces, beaches, farms and community, with a relaxed ‘island living’ vibe. I don’t know if we have more artists living in Jamestown than other places in Rhode Island, but it’s a great place to think and create.

Blair credits the local community and organizations such as the arts association and the Jamestown Arts Center with creating an atmosphere for artists to emerge and evolve. She said the two organizations provide a place where artists of all ages can come together, collaborate and create.

“They’ve done a phenomenal job of bringing love for the arts to everyone on the island,” she said. “When the JAC was first conceived, I volunteered my time to create their very first website because I believed the island needed a hub, an accessible place to learn, teach and create.”

Blair also collaborates with the Jamestown Community Theatre. She’s been designing posters for the troupe since 2004, when her daughter, Alessandra, appeared in the production of “My Fair Lady.” She approaches each musical and plays differently in style and medium, and applies her illustration expertise to give the posters the feel of a grand theater.

“Seeing a professional-looking poster implies that the play is a high-caliber theatrical production,” she said. “And the JCT performs so well, I love being able to help them show their talent.”

Blair’s love of theater and music inspired other works including his series of illustrations and portraits, “Rock and Roll Legends”, featuring musicians like Jimmy Page, Robert Plant, Prince, Jack White, John Lennon and Emerson, Lake and Palmer. Although these works are representative, they are also original.

“Again, I wasn’t into photocopy painting,” she said. “I wanted to capture some of the essence of this musician’s personality fused with the music.”

His illustrations of Page, in particular, capture some of the magic and mythology associated with the Led Zeppelin lead guitarist.

“It seemed wrong that so many younger generations had never heard of the legendary rock and roll heroes I grew up with in the 70s, so I decided to pay tribute to some of my personal favourites,” said she declared. “I was also a big Jimmy fan, so I did a big painting of him that was iconic, with a fire and magic Ouroborus emanating from his guitar as he played.”

With so many interests and an ability to work in a variety of media, Blair said she is constantly evolving as an artist.

“Artists spend thousands of hours practicing and perfecting their skills,” she said. “You never stop learning and you are never satisfied with the level of skill achieved. You are always looking for more.

Oil paintings are hard things to clean up by yourself