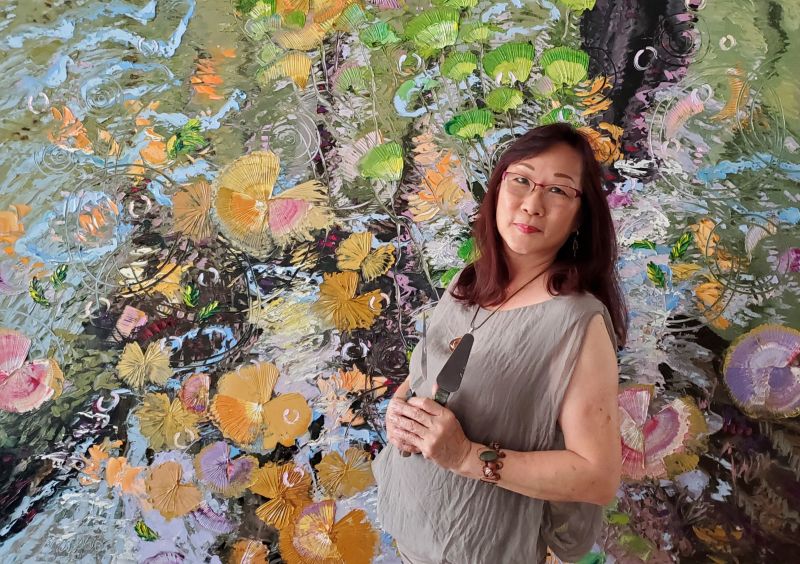 Titled Reflections on Awakening, the abstract series explores Asian-American discrimination by drawing attention to what is “beautiful and meaningful in Chinese culture as the catalyst for all the brutality caused by hate,” as she puts it. It is based on a traditional Chinese mindset: “With a little patience, you will find calm and peace; step back a little and you will find more space around you’ (忍一時風平浪靜，退一步海闊天空).

“It’s the mindset we were taught growing up in an Asian household, where conflict needs to stay away from any type of situation for the best outcome,” MaiYap explains. “The idiom encourages the one who says that if you are patient and keep silent in the moment of anger, you will escape grief and avoid unnecessary discomfort. But is this a good solution in the face of discrimination? detrimental treatment or disrespectful comments Asians tend to ignore to avoid potential trouble and embarrassment, perhaps in an arduous, sometimes futile, attempt to belong.”

She adds: “Asians have always been used as scapegoats, from the whitewashing of railway constructions in the early 19th century to Japanese internment to the murder of Vincent Chin and the ‘Chinese virus’ – while being called ” model minority”. The voices of Stop Asian Hate have never stopped; however, prejudice and hatred towards Asians is increasing over time, especially after 2020.”

Deeply stricken by the hate crime targeting Asian Americans, particularly the 2021 Atlanta spa shooting, MaiYap began to reconsider her identity, her roots, and what it meant to be an Asian woman in the States. -United. Growing up as a minority in Panama, MaiYap often found herself the only Asian. She deeply felt the fear of being different. After moving to South Florida, MaiYap realized that Asian communities are still relatively invisible in many aspects of social movements compared to other minorities.

While racial issues have been thrust into the spotlight during and after the global pandemic, racism towards Asian immigrants doesn’t seem to be getting enough attention as it should. MaiYap’s new series of works aims to dig deeper by exploring and uncovering her authentic feelings and presenting the process of self-discovery through stabs and colors.

Thus, MaiYap’s paintings depict multiple layers of subject matter, such as water, the reflection of the environment, and plants moving back and forth in between. She uses water lilies and lotus leaves to symbolize her state of mind. In Buddhism, the lotus is often a sign of peace, grace and strength in the soul. In his paintings, however, there are no victorious blooming lotus flowers. Instead, only leaves are shown. “Reflection on Awakening is a series that focuses on the ongoing healing process and the ongoing journey toward finding inner peace,” she says. “The paintings do not wish to bring out the dark side but to approach the serious subject of Asian hatred from an aesthetic and meditative attitude. Believing in bringing out the beauty of Chinese culture, which values ​​crafts and traditions, I also hope to heal my grief by digesting information through the layers of my paintings.My process unfolds grief and empathy for my people, the Asian community.

The works also reveal a master colorist at play. Award-winning and with three decades of experience in the field, MaiYap paints oils in a variety of techniques, ranging from realistic flowers using traditional brushes to landscapes and abstracts done exclusively with palette knives – the latter being the case here.

Based in Miami, Florida, MaiYap was educated at the University of Georgia, where she earned a degree in advertising and graphic design. She currently teaches art at the prestigious Fairchild Botanical Gardens and is the founder of Palette Knife Artists of Miami. Over the past decade, his work has also been exhibited in over 100 galleries, museums and fairs in the United States, Panama, Korea, Morocco and China.

“The constant search for my identity, my place in the world and the fight to preserve our planet are at the heart of my artistic research,” she says. “I wanted to be an artist since I was five years old. My grandparents and four siblings moved to the Panamanian capital, about a three-hour drive from the small town of Aguadulce, where we all lived. My parents decided they needed a better upbringing. Remember how old cars had a big gap under the back window? You could say my love for nature started in the back of my car. my dad as we went to visit family every weekend. Lying there looking up at the sky on those long trips, I discovered the clouds, trees and blowing wind. Trying to convey that feeling of amazement defined my art from the start.

On her palette knife technique, MaiYap tells us that it took her around 120 paintings and five years to get to where she is today. “Even though some of these paintings may start with a difficult emotion, like anger or disappointment, in the middle of the process my positive, happy personality begins to show through on them. They ended up being voices of hope and gratitude. I honestly believe that no matter what, with love, we can change the outcome of our lives and our planet for future generations.”